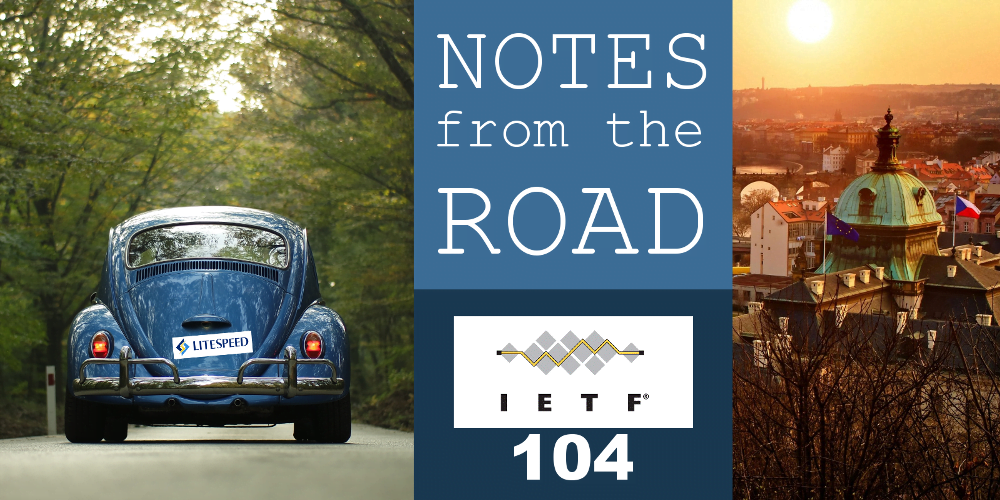 IETF 104 has come and gone. Held in Prague last week, the conference had plenty of interesting meetings. I wanted to follow the progress of the QUIC, TLS, HTTPbis, and DoH Working Groups. I attended the meetings remotely despite the inconvenient time difference.

Where are the browsers?

It takes two to tango. While there are many server implementations at various stages of development (for example, did you know that www.litespeedtech.com can be fetched using ID-18 version of the IETF QUIC?), there are no browsers that use IETF QUIC protocol. David Schinazi (Google) reported that Chromium only supports the QUIC handshake for now, while Eric Kinnear (Apple) said that Safari has a functional IETF QUIC branch.

As QUIC uses TLS 1.3, it must somehow support key updates. There have been several proposals how to do this. Martin Thomson (Mozilla) summarized them in his presentation to the Working Group (see slides). The august body, predictably, failed to reach consensus and thus compelled the chairs to empanel YADT (Yet Another Design Team) headed by David.

A trifecta of presentations on QUIC tooling engendered much enthusiasm among the TSVAREA meeting attendees. The presentations were

Part of a slide from Robin’s presentation.

The QUIC WG Interim meeting scheduled at the end of May in London may become the last our WG holds. As usual, the official IETF WG business will be preceded by two days of interop, which will target the (yet unpublished) 20th revision of the IETF QUIC Draft.

The QUIC WG chairs, Lars Eggert and Mark Nottingham, instructed the editors to plan for submitting the drafts to the IESG in July. In the next sentence, they qualified that date as “aspirational…”