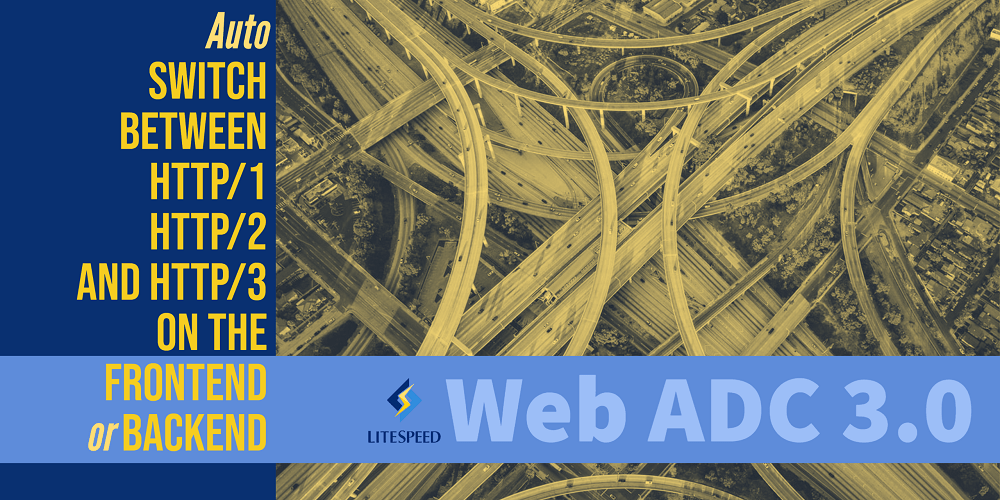 Web servers and web browsers rely on HTTP to communicate with each other. The HTTP protocol in use on the web today may be one of three versions (HTTP/1.1, HTTP/2, or HTTP/3) and not all browsers or servers support all three versions.

LiteSpeed Web ADC v3.0 has the unique ability to proxy requests across all HTTP versions, providing end-to-end HTTP/3 for backend servers that support it.

Because it can support all versions as both a server and a client, our ADC acts as a bridge between disparate technologies. This enables us to upgrade requests from HTTP/1 to HTTP/3 for backend servers that support HTTP/3, or to downgrade requests from HTTP/3 to HTTP/1 or HTTP/2 for backend servers that cannot. This provides maximum flexibility and optimal performance regardless of backend infrastructure.

What is LiteSpeed Web ADC?

LiteSpeed Web ADC is a high-performing HTTP load balancer and application delivery controller. It is a 100% software solution, meaning it can operate anywhere: private dedicated hardware, hosted environment, or the cloud, and can act as proxy to any type of backend web server (LiteSpeed, Apache, nginx, etc.).

Browser connections to the ADC work much as they would with any other server.

The Initial connection is an HTTP/1 SSL connection. This may be negotiated to HTTP/2 during the SSL handshake, and further upgraded to HTTP/3 once the browser processes the ADC response headers. All LiteSpeed web serving products can handle all versions of HTTP requests. So, whether the connection is via HTTP/1, HTTP/2, or HTTP/3 mainly depends on what the browser can support.

Here is where LiteSpeed Web ADC differs from other proxies.

When the ADC is unable to serve a request on its own and must retrieve a page from a backend web server, the ADC takes on the role of client. Then, the same process as above is played out between the ADC and the backend server. The ADC negotiates a connection via HTTP/1, HTTP/2, or HTTP/3 depending on what the backend server supports.

No other proxy supports HTTP/3 connections to the backend servers. Many proxies don’t support HTTP/2 either. But LiteSpeed Web ADC provides support for all modern HTTP versions, along with all of the benefits that entails.

LiteSpeed Web ADC has the ability to switch between HTTP protocol versions depending on the capabilities of the frontend browser and the backend servers. This interchangeability offers the maximum flexibility between infrastructures. Plus, it enables us to multiplex both the frontend and the backend, and support end-to-end HTTP/3. That leads to better performance all around.

Get a trial license, and take LiteSpeed Web ADC 3.0 out for a spin today!