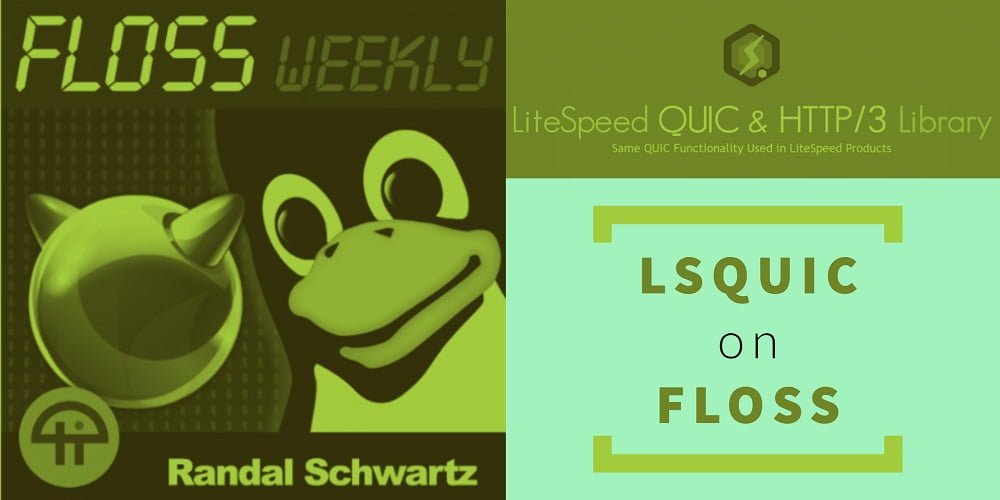 On Wednesday, November 27th, I was a guest on the FLOSS Weekly show on TWiT to discuss LSQUIC, our QUIC and HTTP/3 library.

I first learned about the FLOSS Weekly podcast a year or two ago. The idea to appear as a guest on the show did not occur to me until much later. Immediately, it made sense: our QUIC and HTTP/3 library is a full-featured, well-tested, and robust implementation of an increasingly important Internet protocol. And — it’s open source!

Because I have been involved with QUIC and HTTP/3 development at the IETF for some time, I would also be able to shed some light on certain aspects of these protocols.

I emailed Randal Schwartz, the host of the show, and he slotted me in for November 27th.

The date of the show was drawing near and, as I still had not received any details about the setup, I began to worry. Did Randal forget about me? Finally, on the 26th, I emailed Randal basically to ask him this. He replied, somewhat incredulously, “did you not receive my previous emails?!” It turns out, Gmail had been helpfully discarding Randal’s emails as SPAM. Sabotage?*

The preparation for the show consisted mainly of testing my audio and video equipment. While the laptop’s built-in webcam was OK, TWiT deems any built-in laptop microphone as inadequate. I also learned about positioning of the webcam (eye-level) and lighting (in front, not behind). These simple adjustments make a large difference.

I admit it: I was nervous. While I have spoken in front of large audiences before, a live TV show would be a new experience for me.

I made a Skype connection with a TWiT Live Line user a few minutes before the show. We checked the audio and video feeds and I said hello to Randal and Jonathan Bennett, that week’s co-host. And the show was on!

Within a few minutes — after the introduction and an advertisement from the show’s sponsors — I was brought on and chatted away happily with Randal and Jonathan about QUIC, HTTP/3, and LSQUIC. The interviewers prepared well and we discussed the evolution of HTTP/3, the good and the bad of basing a transport protocol on top of UDP, LSQUIC performance and history, and many other topics. There were a few questions from the live “studio audience,” which is just a dedicated IRC channel. Some levity was had as well: no, there is no HTTP/4… yet!

Rather than providing a condensed transcript, I suggest you click the link above and watch the YouTube video or grab it from your favorite podcast platform. The discussion lasted for about 50 minutes — or almost the whole show — after which it was time to wrap up.

The edited version of the show was posted online in three or four hours. They did not take anything out; rather, the show was rearranged by topics, as we jumped around a bit, and for a better flow. It was a good editing job, which is not surprising: ours was FLOSS Weekly show number 557.

I loved being on the FLOSS Weekly show and I recommend it to everyone. If you have an open-source project that you love, you should consider sharing it with the rest of the world on TWiT with Randal Schwartz and his brigade of co-hosts.

It was a special thrill for me to be interviewed by Randal Schwartz, the co-author of Programming Perl and Just another Perl hacker. That book I had on my bed stand and I carried it with me on my commute to college, hiding it under my jacket from the rain. Perl was my first true love.